Biden will be announcing his pick for vice president soon, and I think one aspect of the VP selection has been overlooked in the discussions about it. Most of the focus on the VP has been about what the pick does for the presidential nominee’s electability or appealing to different demographics. I don’t know if the data supports those factors, I would guess they’re very overrated. But the factor that doesn’t get enough attention is whether the chosen VP will be a good candidate for a future presidential election.

In recent years several VPs have gone on to run for president and win the party nomination. I wanted to look at this more closely and see how common it is and if there are any trends. So I looked at all 48 VPs to see if they sought the presidency after their VP term, whether they got the party nomination, and if they eventually won the presidency. See the first image for the table I put together summarizing that information (it’s color coded to be more at a glance, see the second image for the key). 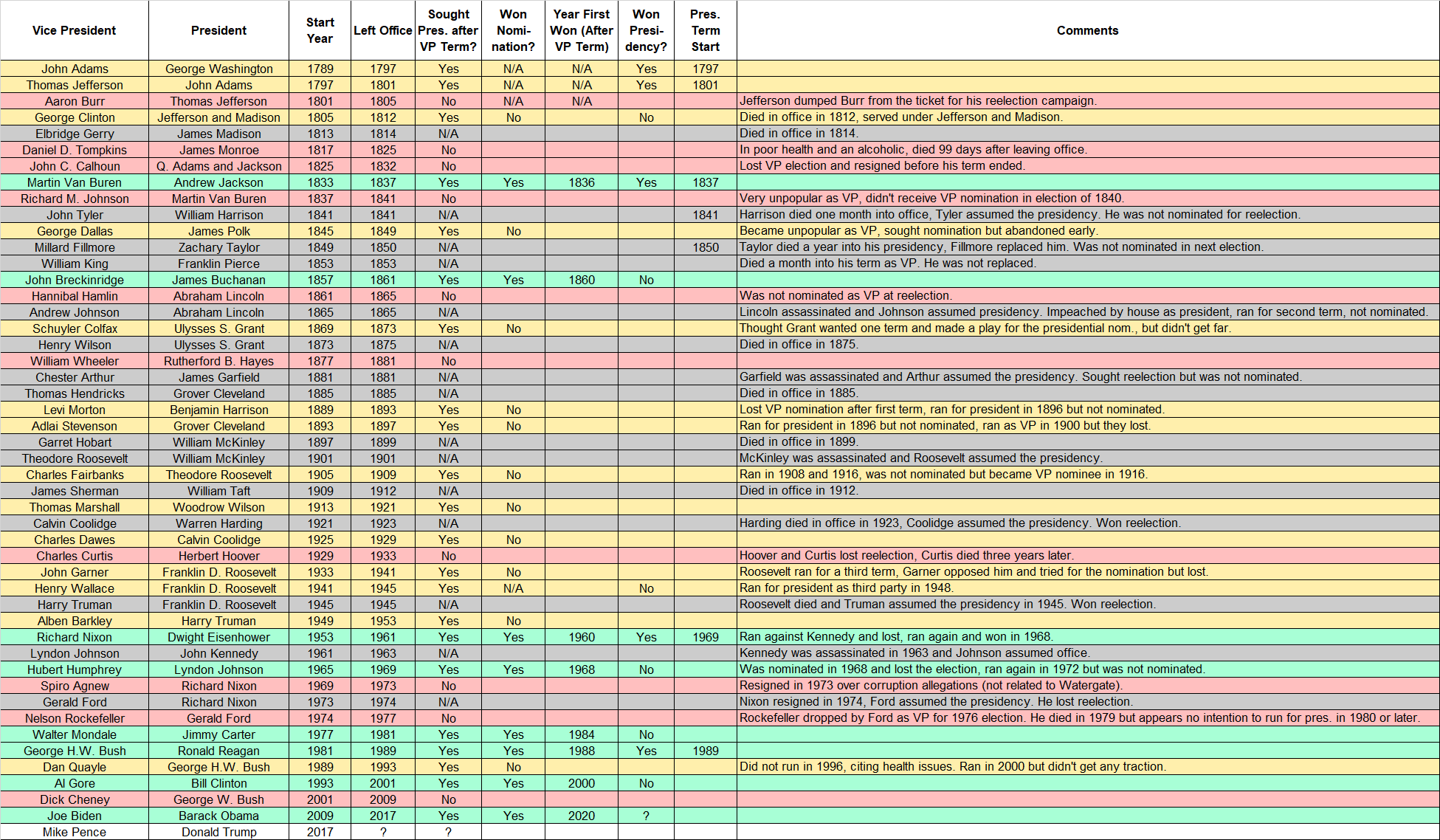 *Used where VP died in office or president died and VP assumed office. VPs who succeeded to the presidency are not counted as a nomination or run for presidency.

As you can see there’s a recent trend toward VPs becoming the party nominee in the future. A couple things surprised me about this table. One is that a lot of VPs and presidents died in office. Those are the rows in gray. This table also seems to point out the benefits of improved healthcare, as deaths of the VP or president appear to be less common now.

I think there are a couple reasons this trend is happening. One big factor is that the presidential nominee has trended toward being chosen by the public instead of by party leaders. The first state primary was in the first decade of the 1900s. Prior to the prominence of primaries it was up to just the delegates to choose the presidential nominee at the convention, and the delegates were typically important members of the party. I think that as the public gained more control over who the nominee is, name recognition became a bigger factor. Party bosses would be more likely to know all the major players and their politics, so they have a larger pool of favorites to pick from. Your regular citizen might know only the big names and want someone familiar to them.

That’s not to say that prior to that the presidential nominees weren’t picking the VP, in the decades prior to the change to voice votes the delegates would usually just confirm whoever the president wanted to be their running mate. For example, Nixon announced that he wanted Agnew to be his VP at the 1968 Republican Convention and Agnew won the nomination easily. But in the first half of the 1900s and earlier, the VP was often primarily selected by the convention instead of by the presidential nominee. As late as 1944, many in the Democratic party opposed Roosevelt’s VP, Henry Wallace, and convinced him to drop Wallace in favor of Truman.

The high likelihood of the VP becoming the party nominee in the future should have much more weight in the way we talk about the VP selection process. It’s often ignored in these discussions, and I think it should probably be the main criteria for selection. Using presidential prospect as the main criteria forces us to put more weight on factors like age and electability. I’m also very glad that Biden promised to nominate a woman. Putting a woman in prime position to be party nominee in a future election greatly increases the chances of a woman becoming president in the near future. After hundreds of years with very little diversity in the oval office any move to increase the odds of greater diversity and representation is very important.

If I made any errors please let me know. My sources for this were mainly a whole bunch of Wikipedia articles that are easily found so I won’t bother linking to them, and a few other articles I used to verify things that were vague or looked questionable. And as a final note keep in mind the sample size is low, particularly when we’re just looking at the last 50 or 75 years, so this isn’t a bulletproof analysis by any means. But I do think the trend is legitimate considering the changes that have happened in the ways presidents and VPs are elected.

Here’s a link to the spreadsheet I put together and pulled the above images from. If you find it useful or want to copy and modify it feel free to use as you please. https://docs.google.com/spreadsheets/d/1xHAgo15nLrWb_TqqQy3J-8vF0WGosy_aVmZK0ERUae0/edit?usp=sharing